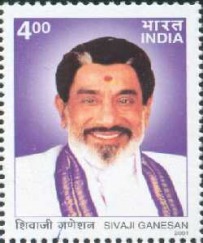 V.C.GANESAN (Villupuram Chinnaiahpillai Ganesan) was born in Villupuram, Tamil Nadu, India on October 1, 1927, to a middle class kallar family.  the title "Sivaji" was given to Ganesan by the great Rationlist,Thanthai Periyar E.V.R.Ramasamy for his best performance in the role of Sathrapathy Sivaji in the stage play "Sivaji kanda Indu Saamraajyam" in the year 1946.
His father, P.Chinniah Mandraiyar, and mother, Rajamani Ammal, had two more sons, one elder and the other younger to Ganesan, and also a daughter. Chinniah  Mandraiyar was working in the South Indian Railway. The day Ganesan was born, his father was arrested for anti British activities and suffered a term of imprisonment. During Ganesan's tender years, he sought interest in being part of stage plays. He joined a drama troupe and spent most of his early years acting in stage plays, eventually dropping out of school.
Ganesan married Kamala on May 1, 1952. They had two daughters named Shanthi Ganesan and Thenmozhi Ganesan. They also had two sons named Ramkumar Ganesan and Prabhu Ganesan, who are now film producers. Prabhu Ganesan had starred in many films.

Ganesan's first film was the Tamil film Parasakthi in 1952, co-starring actress Pandari Bai. The script for the film was written and directed by the now-Chief Minister of Tamil Nadu, M. Karunanidhi.

In most of Ganesan's films, he played multiple roles, commercial roles, and roles of a Hindu deity specially the Lord Shiva role. The portryal of Lord shiva in the movie Thiruvilayaadal won him lot of accolades in and around the film industry. In the film Navarathiri (1964), Ganesan donned nine different roles that represented the nine emotional states of a person. Hindi actor, Sanjeev Kumar, was inspired by this film and reprised the nine roles in Naya Din Nayi Raat in 1974. Ganesan could strike a balance between commercial cinema,Mythological cinema and experimental cinema where his contemporaries in the neighbouring Indian state, N. T. Rama Rao and Rajkumar came just near him but could not match him in an apple to apple basis . Sivaji was always unique when compared to other actors in India during his generation. Expert analyst from cinema admitted the three best versatile actors from India at that time are Shivaji, Rajkumar and N. T. Rama Rao. He experimented in films like Thiruvilayaadal, Thiruvarutselvar, Thirumal Perumai, Karnan, Veerapandiya Kattabomman, Thillana Mohanaambal and Raja Rishi. His role in the film Veerapaandiya Kattabomman made him the first South Indian actor recognized outside India in the Afro-Asian film Festival at Egypt. He was also applauded for his acting in the film Aalyamani which was remade later by N. T. Rama Rao. Apart from his immense success and reception in Tamil cinema, he has also acted in Hindi-, Telugu-, Malayalam-, Bengali and Kannada-language films.

Sheer variety of Ganesan's roles gave him much acclaim and honour. He co-starred with his counterpart, M. G. Ramachandran in one film, which was Koondukkili. He has worked with many of the leading actresses of his time, including J. Jayalalitha, B. Sarojadevi, K. R. Vijaya and Padmini. He also co-starred with Gemini Ganesan, another lead actor at the time, during the 1960s.

In the 1990s, as Ganesan was aging, he co-starred with several other actors. His notable films supporting roles were Veerapaandiyan, Jalli Kattu, Pudhiya Vaanam, Thevar Magan, Pasumpon and En Aasai Raasaave. His last film before his death was Padayappa in 1999 which was also a blockbuster.
Apart from his numerous roles as a single star on screen, Ganesan has acted in supporting roles with many leading actors from different eras. Ganesan has co-starred with M. G. Ramachandran, M. N. Nambiar, Gemini Ganesan, Kamal Haasan, Rajinikanth, Prabhu Ganesan, Sathyaraj, Vijayakanth, Mohanlal, Ramarajan, Y. G. Mahendran, Sivakumar, K. Bhagyaraj, Karthik Muthuraman, Arjun Sarja, Joseph Vijay and Abbas. He has also worked with a vast amount of directors and producers. His legacy continues to be remembered today and is looked upon by many leading film actors.

Until 1955, Ganesan was a staunch sympathizer of the Dravida Munnetra Kazhagam. He was eventually expelled from the party because of his visit to the Tirumala Venkateswara Temple which was not permitted by the rationalistic DMK.[citation needed] In 1961, he become a strong supporter of the Indian National Congress and particularly the then-leader K. Kamaraj. When the congress split in 1969 he remained loyal to the leadership of Kamaraj and the Congress. Only after the death of Kamaraj in 1975, he switched his allegiance to Indira Gandhi. In 1982, Indira Gandhi made Ganesan a Member of Parliament in the Rajya Sabha. After 1987, he left the Congress and floated his own political party, the Thamizhaga Munnetra Munnani. Ganesan and his party were known to be pro-LTTE, when the then-Prime Minister of India Rajiv Gandhi had withdrawn the Indian Peacekeeping Force from Sri Lanka. He later merged his party with the Tamil Nadu faction of the Janata Dal in 1989.

Suffering from respiratory problems, Ganesan was admitted to the Apollo Hospital in Chennai on July 21, 2001. He also had been suffering from a prolonged heart ailment for about 10 years. He died at 7:45pm (IST) on July 21, 2001 at the age of 73. A documentary, Parasakthi Muthal Padayappa Varai was made to commemorate Sivaji Ganesan's legacy. His funeral was attended by thousands of viewers, polititians and personalities from the South Indian film fraternity.

The former South Indian Film Artistes' Association president Vijayakanth declared that October 1, the birth day of Ganesan, would be observed as Actors' Day in the Chennai film industry.

Sivaji Ganesan has remained as the most popular Tamil actor with the most of number of fans. This fact has been confirmed by many independent surveys conducted.
The popular Tamil magazine Kumudam conducted a survey in 1990. Sivaji Ganesan was voted as the most popular actor with 59% votes followed by M. G. Ramachandran (54%), Rajinikanth (51%) and Kamal Haasan (50%). Though the survey was conducted in 1990, when Sivaji Ganesan had almost retired from acting and Rajinikanth and Kamal Haasan were rising stars in Tamil cinema, another survey conducted by Loyola College in 2008 saw Ganesan in 2nd position, second only to M. G. Ramachandran (who was once, unlike Ganesan, a more commercial actor and ex-Chief Minister of Tamil Nadu) but way ahead of the present day stars Joseph Vijay and Rajinikanth.
Few other surveys conducted in a scientific manner have thrown up similar results reaffirming Sivaji Ganesan’s supremacy.

Popularity in the US

During a visit to the U.S. in June 1995, Sivaji Ganesan found himself in Columbus, Ohio. Mayor Greg Lashutka named him honorary citizen of Columbus at a special dinner.
In 1962, Ganesan toured the U.S., where he was given the honour of being the mayor of Niagara City for one day. He along with the former Indian Prime Minister Jawaharlal Nehru were the only two Indians to be honoured this way.
When actor Marlon Brando visited India, he was shown film footage of Sivaji Ganesan. From then on Brando admired Sivaji Ganesan for his acting style. He also admitted that "Sivaji Ganesan may act like me but I cannot act like Sivaji Ganesan

Sivaji Ganesan's most prestigious award was the 'Chevalier' in 1995, awarded by the National Order of the Legion of Honour in France. This is one of the main decorations of the French Republic which is conferred to honour the most original and talented personalities, for their remarkable contributions in the field of Arts and Literature in France and all over the world. On April 22, 1995, at a ceremony held at the MCA Stadium, Chennai, Sivaji Ganesan was presented the Chevalier title and medallion by the French Ambassador to India, Philip Petit. J. Jayalalitha, the entire Tamil film industry and representatives of all other Indian regional film industries were present at the ceremony.