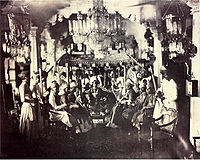 Thondaiman in his Palace
Thondaiman the Last Tamil King.
The Last Kallar kings, were ruling Thondai Nadu from unknown antiquity until 1948 (The Thondaiman dynasty of Pudukkottai), There are Hundreds of records pertaining to this dynasty.
They were the only kings were ruling Part of tamilnadu till 1948.


Reference in Sangam literature
The Kallar Ruler Thondaiman Ilandirayan was mentioned in Purananuru in one of the poem written by Avvaiyaar as a King Confronting adiamar and the Battle was avoided by tactics of Avvaiyaar.

Aranthangi Thondaimans were the chief patrons of the Avudayarkovil temple, and had liberally donated to the maintenance of the temple, as indicated by copper plates in the possession of the Tiruvavaduthurai Adheenam.

They had gifted lands etc. to Tiruvarur, Rameswaram, Kanchipuram and also Benares temples. About 25 copper plates grants of Aranthangi Thondaimans have been recorded so far, and 16 of them are in the Thiruvavaduthurai Adheenam.


The Thondaiman dynasty of Pudukkottai
The princely state of Pudukkottai was created by His Highness Maharaja Raghunatha Thondaiman, Raghunatha Kilavan Setupati of Ramnad (1673-1708 A.D.) married Kathali Nachiar the sister of Thondaiman and he appointed his brother in law Raghunatha Thondaiman as a chief of the district of Pudukottai. Raghunatha Thondaiman (Son of Avudai Raghunatha Thondaiman) was earlier ruling Thirumayam. In appreciation of Raghunatha Tondaman's services, Raghunatha Kilavan Setupati has given Pudukkottai as an honour for his services. In later centuries, the Thondaiman rulers, while nominally feudatories of the Ramnad state, often pursued an independent foreign policy, a trend common in all parts of India at that time.After the death of Raghunatha Kilavan Setupati he become ruler of Pudukottai. After becoming the ruler of Pudukottai, Raghunatha Thondaiman fought against the Nayaks of Tanjore in support of the Nayaks of Madurai and conquered Thirukkattupalli a very important place. Then there was a direct clash between Thondaimans of Pudukottai and the Nayaks rulers of Tanjore. Thondaiman conquered the west of Thirukkattupalli. The next ruler Raja Vijaya Reghunatha Raya Thondaiman he helped Arcot Nawab against Hyder Ali the ruler of Mysore. He was also loyal towards the British Government. After some time, when Hyder Ali’s army tried to enter into Pudukkottai, the Thondaiman’s army successfully defeated them and drove Hyder’s army away. Thondaiman captured Kilanilai and Aranthangi. He helped the British Government against Tipu Sultan. Pudukkotai finally came under formal British protection. This was arguably unavoidable, since the Thondaimans were much menaced in that period by a resurgent Mysore ruled by Hyder Ali and Tipu Sultan. Tipu Sultan had sought to leverage the power of the French against his British adversaries, and Pudukkotai, in common with its neighbours such as Thanjavur and Travancore, found it expedient to ally with the British.

Raja Rajagopala Thondaiman (1928 -1948) the last and ninth in the line of Thondaiman rulers, was selected by the British Government and was crowned when he was six years old. After Indian independence in 1947, the Pudukkottai Princely State was amalgamated with Indian Union on 04/03/1948 and became a division in Tiruchirappalli district. The long history of the Thondaimans rule came to an end.